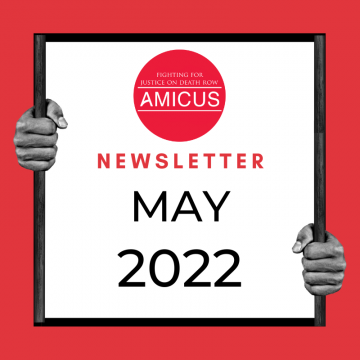 Abortion, Prison and the Death Penalty
On May 2nd, 2022, a draft opinion from the United States Supreme Court was leaked, signalling the court’s intention to overturn the notorious Roe v Wade... Read more by becoming an Amicus Member.

Death row inmate’s dreadful dilemma: lethal drugs or cyanide used by Nazis
Frank Atwood, who has been on death row for over 35 years, was unanimously denied clemency in late May. His execution is expected to take place on 8 June... Read more by becoming an Amicus Member.

Missouri inmate whose death sentence was overturned three times set to be executed today
Carman Deck, a Missourian, was executed on 3 May 2022 after 26 years of legal fights for his life and constitutional rights... Read more by becoming an Amicus Member.

FEATURE by Josh Laverick, runner up of the Edinburgh/Nottingham Interuniversity Essay Competition
Read Josh's essay on 'The Role of the Jury: Should individuals Who Are Not Experts Be Able to Decide Whether Someone is Sentenced to Death?'. This question infers that an expert such as a judge would provide a different decision to that of a jury; that their legal expertise and experience would make their decisions more objective, as opposed to a jury, whose lack of legal familiarity would lead them to take a more subjective, personal stance in their decision... Read more by becoming an Amicus Member.