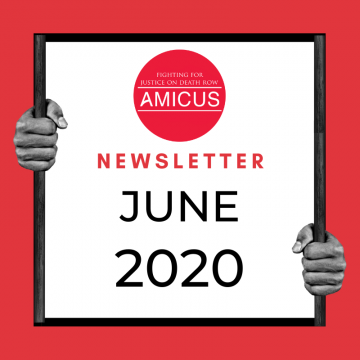 Florida Governor Signs Bill Authorizing $2.15 Million Compensation for Death-Row Exoneree Imprisoned 43 Years
Williams was sentenced to death and Myers was sentenced to life in prison, although another man had confessed to murdering Jeanette Williams. After spending 43 years on death row, Clifford Williams Jr. will receive $2.15 million in compensation from the state of Florida... Read more

Urgent appeal made to the Supreme Court to temporarily block federal executions
A federal execution has not been carried out since 2003. This is due, in part, to a widespread shortage during the Obama administration of lethal injection drugs in the so-called three-drug cocktail. Additionally, in November 2019, District Judge Tanya Chutkan put executions on hold indefinitely... Read more by becoming an Amicus Member

Bobby Moore's Supreme Court case changed how Texas defines intellectual disabilities. After 40 years in prison, he has just been granted parole
Last year, the US Supreme Court resentenced Bobby Moore from the death penalty to life imprisonment, after it was determined he was intellectually disabled. Moore had already served 40 years, 39 of which were spent on Texas’ death row,1 meaning he was immediately eligible for parole… Read more by becoming an Amicus Member

Arkansas federal court rejects death-row prisoners ‘challenge to state’s use of midazolam in executions
Earlier this month, North Carolina ruled to reinstate the Racial Justice Act (RJA), a landmark Act allowing capital defendants to challenge their death sentences if they prove that race was a significant factor at trial… Read more by becoming an Amicus Member

Hope for North Carolina in a year of racial injustice for America?
Litigation relating to Arkansas’ use of midazolam in executions dates back to 2005, the last time an execution took place in Arkansas. Up until 1983, electrocution was the main execution method in Arkansas, until the Arkansas General Assembly phased out electrocution... Read more by becoming an Amicus Member

MLA Requests; a rejection of capital punishment or something more sinister?
The UK briefly paused sending information in response to Mutual Legal Assistance (MLA) Requests to countries including the United States of America (US) following a 2020 decision by the Supreme Court. Ostensibly, this pause was to protect the ordre public of the United Kingdom... Read more by becoming an Amicus Member