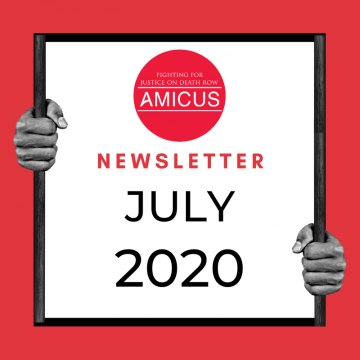 Last man on San Francisco’s death row has his sentence reduced to life in prison
On 7th July 2020, District Attorney Chesa Boudin agreed to reduce the death sentence of Clifford Stanley Bolden to a 47 years-to-life sentence. Clifford Stanley Bolden was the only man on San Quentin’s death row from San Francisco and the last person on California’s death row... Read more by becoming an Amicus Member

Pandemic and continuing historic decline produce record-low death penalty use
It is fair to say that living through a pandemic does not induce an expectation of positive news. However, the effect of the current health crisis has created at least one progressive effect: death sentences and executions were at an unprecedented low during the first half of 2020... Read more by becoming an Amicus Member

Supreme Court refuses to block upcoming federal inmate executions
On the 29th June 2020 the US Supreme Court declined an appeal challenging the compliance of federal death penalty protocol with the Federal Death Penalty Act 1994. The decision gave the green light for federal executions to resume, for the first time since 2003… Read more by becoming an Amicus Member

San Quentin Death Row COVID-19 Outbreak
San Quentin State Prison in California is the state’s only death row for male inmates and the largest death row in the United States, yet it has not carried out an execution since 2006. However, since the beginning of June at least 15 inmates, including eight from death row, have lost their lives due to a COVID-19 outbreak... Read more by becoming an Amicus Member