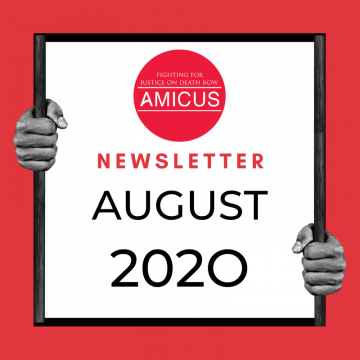 Oregon’s only woman on death row resentenced
Angela McNulty, 51, of Eugene pleaded guilty and was convicted in February 2011 of torturing and killing her 15-year-old daughter in 2009. McNulty was sentenced to death, making her the first and only woman to be sentenced to death in Oregon... Read more by becoming an Amicus Member

U.S. may drop death penalty to obtain evidence on British ISIS detainees
It has been reported that the US Department of Justice (DOJ) will not be capitally prosecuting Shafee El Sheikh and Alexanda Koteybe on the condition that the UK government provide intelligence to assist in their prosecution... Read more by becoming an Amicus Member

Do Black (Victims’) Lives Matter?
Black lives matter and so do black people’s access to justice. The lives of black victims have been shown to be undervalued in the current Columbia Law Report. The context of the report is particularly focused on the wide discretion built into capital sentencing which allows for racial prejudice to persist... Read more by becoming an Amicus Member

Kareem Johnson becomes nation’s 170th death-row exoneree since 1973
On June 25th, 2007, an 18-year-old man, Kareem Johnson, was convicted of first-degree murder and sentenced to death by a jury in Philadelphia. Thirteen years and six days later, on the 1st July, the Philadelphia Court of Common Pleas formally dismissed all charges against him... Read more by becoming an Amicus Member