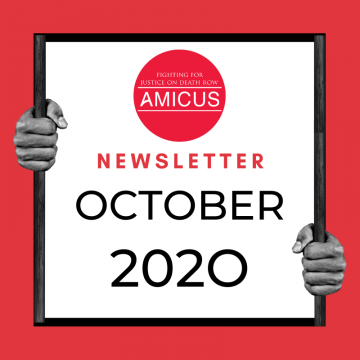 New Report Finds Misconduct in Death Row Exonerations with a Bias Against Black Defendants
A damning new report titled Government Misconduct and Convicting the Innocent, commissioned by the National Registry of Exonerations, has highlighted gross misconduct in police and prosecutorial roles in death row exoneration cases. The 2020 report also uncovered an increase in misconduct in cases where the exoneree was black...  Read more by becoming an Amicus Member

Supreme Court Asked to Reinstate Death Penalty for Boston Marathon Bomber
The US Justice Department (DOJ) asked the US Supreme Court on Tuesday to reinstate the death penalty for Boston Marathon bomber Dzhokhar Tsarnaev. The DOJ argues that the Supreme Court should reinstate the penalty to give deference to the trial court’s decision, prevent new jurors from enduring a longer jury selection process, and protect victims from having to recount their experiences during trial... Read more by becoming an Amicus Member

The Death Penalty in North Carolina: a Devastating Tool of Racial Oppression
This year, the murder of George Floyd sparked demands for racial justice and equality in the US. In pursuit of critical reform, there is an institution which must not be left out of the conversation: the death penalty. While some attempt to justify its necessity in claims of criminal deterrence and public protection, in reality it functions as “a weapon of social control rooted in a racist past” ... Read more by becoming an Amicus Member

Death Row Appeal Rejected in Case with Prolific Jailhouse Informant
James Dailey, a Vietnam War veteran, has been living in a 6-by 9-footcell1 for the last 33 years,after he was sentenced to death for the 1985 murder of 14 year-old Shelly Boggio. Dailey has petitioned the Supreme Court, asking them to consider his co-defendant’s 2017 confession that “[he] committed the crime alone” along with additional evidence that the prosecution failed to disclose… Read more by becoming an Amicus Member

Eighth Federal Execution since July Scheduled for November 19
The eighth execution under the Trump administration’s resumption of federal executions is due to take place on November 19, 2020. Orlando Hall, a Black death row inmate, was convicted of kidnapping, raping, and killing a teenager in Texas in 1994. Alongside Hall, four other men were involved in this crime but only Hall and one other, Bruce Webster, faced capital punishment. The other three suspects were allowed to sign plea deals ‘for their prison time in exchange for testifying against Hall and Webster’... Read more by becoming an Amicus Member