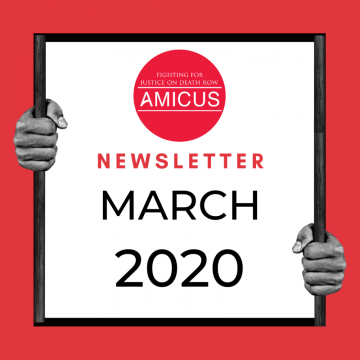 The California Moratorium
In March 2019, Governor Newsom halted all executions in California saving 737 inmates on death row. In the same year, New Hampshire voted to abolish the death penalty. In 2020, Colorado did the same. The tide is turning against the use of the death penalty as more politicians become vocal about their views. The current toll stands at 25 death penalty states, 22 states without the punishment and three who have imposed a moratorium...Read more by becoming an Amicus Member

Idaho execution drugs purchased in a Walmart car park
According to an application filed before the Idaho Federal Court on 5th March 2020, Idaho State’s Correctional Department (IDOC) purchased drugs to be used in state executions in a Walmart parking lot with a suitcase full of cash. This is the issue being raised by the Capital Habeas Unit (CHU) for Idaho, who argue that the former and current IDOC Directors (Kevin Tewalt and Josh Kempf) took $10,000 in cash and boarded a plane to Tacoma Narrows, Washington and purchased pentobarbital in a Walmart parking lot...Read more by becoming an Amicus Member

Colorado becomes 22nd state to abolish death penalty
Governor Jared S. Polis gave anti-capital punishment activists something to celebrate on the 23rd of March, when he signed a law repealing the death penalty in Colorado. It had passed the state’s Senate in January and made its way through the House in February, primarily driven by Democrat legislators (who control both chambers), but with the support of some Republicans…Read more by becoming an Amicus Member

“With Coronavirus taking over, executions should be the last thing on the list”
John Hummel’s execution, which was scheduled to be on 18th March 2020, has been stayed for 60 days due to the COVID-19 coronavirus pandemic. The Texas Court of Criminal Appeals (TCCA) halted Hummel’s execution as the delay was necessary “in light of the current health crisis and the enormous resources needed to address that emergency”. Hummel was sentenced to death by a Tarrant County jury in 2011 after the 2009 murders of his pregnant wife, his 5-year-old daughter and his father-inlaw…Read more by becoming an Amicus Member

The execution of Nathaniel Woods
Earlier this month, Nathaniel Woods was executed in Alabama. Woods was put on death row after the 2004 killing of 3 police officers at an incident in a drug house. Though the officers were not shot by him but by his co-defendant Kerry Spencer, Woods was still held accountable. Improper representation at his trial severely impacted the success of his case, and the location of Alabama meant the death penalty was easier to apply...Read more by becoming an Amicus Member