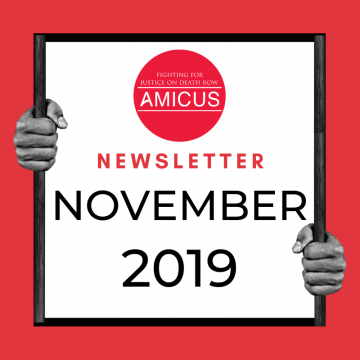 Free Rodney Reed: rising distrust in Texas’ use of the death penalty

20th November 2019 was the scheduled date of Rodney Reed’s execution. Reed is a Texas prisoner who has continuously claimed his innocence in the murder of a woman 23 years ago. Since his trial in 1998, where as a black man, he was convicted by an all-white jury, the Innocence Project have discovered substantial evidence that exonerates Reed...Read more by becoming an Amicus Member

Intellectually Disabled Prisoner Taken Off Death Row
This November Bobby James Moore was found to be intellectually disabled by the Texas Court of Criminal Appeals (TCCA), after spending 39 years on death row. This was in response to the reversal of his death row sentence by the US Supreme Court twice, with the TCCA finally conceding that “Moore ... is a person with intellectual disability.”...Read more by becoming an Amicus Member

Prisoner Executed After Supreme Court Denies Review of Anti-Gay Bias
Charles Rhines was put to death on 4 November1 by lethal injection, becoming only the fifth person executed in South Dakota since the federal moratorium was lifted in 1977. Rhines’ guilt for the 1992 murder of which he was convicted was not at issue, as he had been found guilty in the first phase of his trial in 1993 after confessing to the crime. However, at the second stage of the trial, the jury were asked to impose either the death penalty, or a life sentence without parole. Sworn affidavits from three members of the jury later revealed rampant homophobic prejudice was behind many jurors’ decision...Read more by becoming an Amicus Member

Victims’ Families Join Effort to Call Off Federal Executions
On the 25th July 2019, U.S Attorney General William Barr announced that the federal government planned to resume federal executions on the 9th December 2019. Five inmates; Daniel Lewis Lee, Lezmond Mitchell, Wesley Ira Purkey, Alfred Bourgeois and Dustin Lee Honken had their federal executions planned over the five-week period ending on the 15th January 2020. In announcing the plans, Barr declared that the government owed it to “the victims and their families” to carry forward the imposed death sentences...Read more by becoming an Amicus Member

Ray Cromartie Executed After DNA Test Refusal
Ray Cromartie was executed by lethal injection in Georgia on 13 November despite his lawyers saying that a simple DNA test could have cleared his name. Cromartie, 52, had been convicted of the murder of shop keeper Richard Slysz in a bungled robbery in Thomasville on the Georgia-Florida border in April 1994. Cromartie had entered the convenience store with Corey Clark while Thaddeus Lucas, Cromartie’s half-brother, waited in a getaway vehicle outside. Store clerk Richard Slysz was fatally shot in the head as the robbers failed to open the cash register, escaping with nothing more than a few cans of beer. Cromartie never denied his involvement in the crime but always maintained that he was not the one who pulled trigger...Read more by becoming an Amicus Member