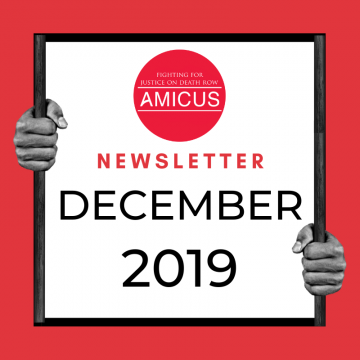 The death penalty fails victims’ families in Virginia
In November 2019, 13 family members of murder victims called on Virginia legislators to abolish the death penalty. As members of the advocacy organisation ‘Virginians for Alternatives to the Death Penalty’, they released a letter calling Virginia’s death penalty system “inefficient and ineffective”. “Our direct experiences with the criminal justice system and struggling with grief have led us all to the same conclusion: Virginia’s death penalty fails victims’ families,” the letter states...Read more by becoming an Amicus Member

Supreme Court temporarily blocks resumption of federal executions
On the 6th of December, the US Supreme Court upheld a lower court’s injunction and temporarily blocked the resumption of federal executions. This follows Attorney General William Barr’s announcement made in July of the federal government’s plan to conduct executions again for the first time since 2003. Barr ordered officials to schedule executions for four inmates starting on 9th December, in an attempt to reverse the informal federal moratorium that has been in place for nearly two decades...Read more by becoming an Amicus Member

The power of D.A.s on the death penalty in Ohio
In the US, district attorneys have a tremendous amount of power, since they decide the seriousness of the charges brought against those accused. An example of this power can be seen in Ohio, where between 2014 and 2018, district attorney Ron O’Brien pursued 10 death penalty cases, only securing a death penalty conviction in one despite the impact on the economy and public opinion...Read more by becoming an Amicus Member

Arizona death-row prisoner granted new trial by federal appeals court
On the 29th of November 2019, a three-judge panel in the Ninth Circuit Court of Appeal unanimously overturned Barry Jones’ conviction for the felony murder of his girlfriend’s four-year-old daughter. The decision was reached on the basis of the ineffective representation afforded to Jones, whose prosecutors failed to challenge critical medical evidence presented by the State...Read more by becoming an Amicus Member