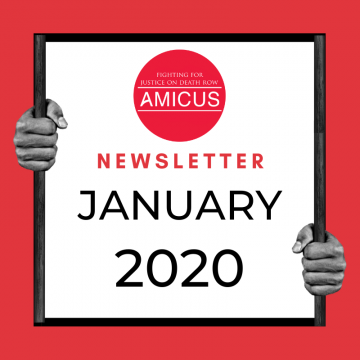 Second Blind Person to be Executed in the USA

Three decades after murdering his ex-girlfriend with a gasoline bomb, Lee Hall was executed in Tennessee on Dec 5th. Lee was put to death using an electric chair in Riverbend Maximum Security Institution in Nashville, making him the second blind inmate to be executed since the death penalty reinstatement in 1976. Hall was sighted when he entered death row... Read more by becoming an Amicus Member

In the last 18 months alone, Tennessee has executed six citizens at a rate not seen since 1960. Tennessee continues to use capital punishment in a way that has not been seen in any other state that retains the death penalty. As of the turn of the decade, there were... Read more by becoming an Amicus Member

Colorado’s death penalty could be repealed this year

In Colorado, legislators from across the political spectrum have come together in what appears to be a defining moment towards the state’s potential abolition of the death penalty. After years of advocating to repeal the death penalty in Colorado, the most recent attempt - in the form of a 2020 repeal bill - seems likely to be successful, due to the movement gaining the required support. Advocates of the repeal have said that the bill has... Read more by becoming an Amicus Member

In 1999, Karl Roberts was found guilty of the murder of his niece, Andi Brewer, who was also the daughter of the state legislator. During the first phase of the case, it was the responsibility of the Court to determine whether the two elements of murder (the actus reus and the mens rea) had been established. Unsurprisingly – as Roberts had confessed to... Read more by becoming an Amicus Member

Since taking office as Governor of Ohio in 2019, Mike DeWine has issued eight execution delays. Condemned prisoner Melvin Bonnell was scheduled to die by lethal injection in February 2019, but received a warrant of reprieve as the state struggled to obtain an adequate enough supply of drugs to carry out his execution. His execution was delayed until 2021. Other cases include Kareen Jackson and Gregory Lott, who – respectively - were scheduled to die in July and August of 2019, and whose executions have been stayed until... Read more by becoming an Amicus Member

On January 14, state Representative Jason Dunnington filed Bill 2876 for consideration during the 2020 legislative session. If passed, the bill will effectively end the death penalty as a sentencing option in Oklahoma. In his press release, Dunnington identified four principal reasons behind his demand for the abolition of the death penalty. He outlines that... Read more by becoming an Amicus Member