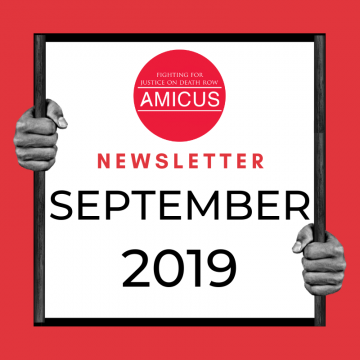 
Department of Justice responds to calls to reinstate the death penalty in South Africa
The department of justice has issued a lengthy statement in response to calls to bring back the death penalty. Public outcry is reaching fever pitch as there have been multiple reports of brutal and violent crimes across the country against women.
Following the brutal slayings of Ayakha Jiyani and her siblings Siphesihle, Khwezi and Kuhlekonke Mpungos at the hands of their father, as well as the ruthless rape and murder of UCT student Uyinene Mrwetyana at the hands of a South African Post Office worker. Riots sparked across the nation in outrage...Read more by becoming an Amicus Member

Prosecutors seek death penalty for Pittsburgh synagogue shooter despite Jewish communities’ strong objections
Prosecutors have announced in a court filing that they will seek the death penalty in the case of Robert D Bowers, who shot 11 congregants at the Tree of Life Synagogue in Pittsburgh, Pennsylvania in October 2018. As prosecutors are pursuing federal charges, they are able to seek the death penalty with the Attorney General’s permission, despite Pennsylvania imposing a moratorium on executions for state crimes in 2015...Read more by becoming an Amicus Member

New deal ends Decades – long legal process in Nashville Death Penalty Case
In February 1986, sisters Shawanna and Katrina were traumatized by the attack of Abu Ali Abdur’Rahman, known as James L. Jones Jr. at the time of the crime, on their own mother and stepfather, while they were in their room scared for their life. Despite the tragic event of losing their stepfather, their mother survived the stabbings with strong wounds and injuries. During his 1987 trial, Abdur’Rahman was sentenced to death. However, months before his scheduled execution on April 16th 2020...Read more by becoming an Amicus Member

White House focuses on death penalty in piecemeal gun control package
The Trump administration is preparing a package of legislative measures in response to the spate of recent mass shootings. The latest and deadliest of these shootings took place in Odessa and Midland Texas at the end of August in which 8 people lost their lives and 25 people were seriously injured. President Trump admitted that the recent shooting in Texas is unlikely to alter the position of the White House, claiming that “it really hasn’t changed anything... irrespective of what happened yesterday in Texas.”...Read more by becoming an Amicus Member

Reinstating the death penalty will not solve femicide
On August 18th 2019, Emine Bulut was murdered by her ex-husband. She was killed in front of her 10-year-old daughter, in a local café, with a video of her murder being shared across social media. This is just one of the reported ‘femicides’ that has taken place in Turkey so far this year. Femicide – the act of killing a woman because of her gender – is known to be a longstanding issue in Turkey. A UN report states that nearly 40% of women in the region face physical or sexual violence
from a partner...Read more by becoming an Amicus Member

Ugandan leader, Yoweri Museveni seeks Death Penalty as violent crimes increase
Ugandan President Yoweri Museveni has announced that he will be asking the courts to impose a mandatory death sentence for murders, following a rise in violent crimes in recent years. Museveni, who stopped signing death warrants in 1999 has expressed concerns that his leniency is encouraging criminals to take advantage, thinking “they can cause harm and get away with it”. Museveni’s decision follows a sharp increase of violent gang and subculture formation in Uganda’s urban centres...Read more by becoming an Amicus Member