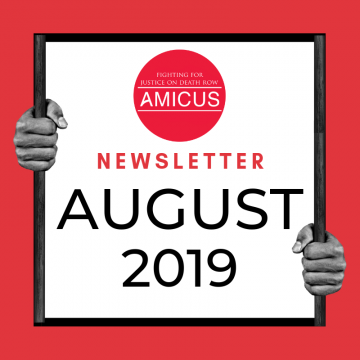 
Arizona to consider reviving the death penalty
Joseph Wood was the last person executed in Arizona. One of Wood’s attorneys Dale Baich witnessed what followed during the next two hours it took Wood to die after being given the lethal injection dose. Some nine minutes into the procedure Woods body began to buck up against the straps his mouth wide open gulping and gasping until he died. Now in 2019 the Arizona Attorney General, Mark Brnovich wants Governor Doug Ducey to reinstate capital punishment...Read more by becoming an Amicus Member

“Barbaric slaughters and crime against all of humanity”- the call for quicker capital punishment against mass shooters
Within the space of 13 hours, two mass shootings occurred in America. As a result, Trump publicly announced his plans to introduce “legislation ensuring that those who commit hate crimes and mass murders face the death penalty and that the capital punishment is delivered quickly, decisively and without the years of needless delay”. But will Trumps plans deter the shooters, considering the fact most do not live to face trial?...Read more by becoming an Amicus Member

Calling Oregon death penalty ‘costly and immoral,’ governor signs bill limiting its use
On August 1st 2019, Kate Brown, governor of Oregon, signed the ‘Senate Bill 1013’ which introduced a limitation to the types of crime that are committed, for which capital punishment can be imposed upon. In addition, Oregon, including Washington, Colorado and California, are some of the only states in the US to impose moratoria for this decade...Read more by becoming an Amicus Member

As federal government restores capital punishment, Pennsylvania pushes to end it
Vicki Schieber suffered the loss of her 23-year-old daughter, Shannon, who was murdered by a serial rapist in 1998 while she was attending the University of Pennsylvania. However, she has chosen to fight to keep her daughter's killer alive, opposed to having him receive the death penalty – which she is pleading be abolished in the state of Pennsylvania...Read more by becoming an Amicus Member

Families of IS suspects fear death penalty risk from evidence given to US
El Shafee Elsheikh and Alexanda Kotey — the remaining members of the ISIS cell known as ‘The Beatles’ — dominated British news for some time for their alleged involvement in brutal executions carried out in Syria. While all wanted to see the group brought to justice, it was not thought possible to try the pair in the UK. US criminal investigation was underway. Cooperation and intelligence sharing is widespread, but in certain cases, such as an abolitionist state assisting serious crimes in death penalty states, the provision of assistance risks capital punishment ensuing...Read more by becoming an Amicus Member