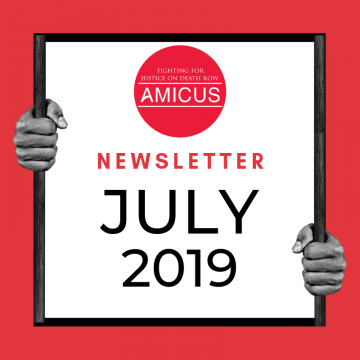 
Nevada judge overturns death sentence in 1994 good Samaritan murder case
Avram Nika’s Chrysler broke down in 1994. He refused help offered to him by several strangers. Eventually, Edward Smith came along and tried to assist. Following some sort of rude remark made by Smith, it seems, Nika hit Smith with a crowbar and shot him point-blank in the forehead. Arrested five days later, in the victim’s car, Nika was convicted of first-degree murder in 1995. The jury sentenced him to death...Read more by becoming an Amicus Member

Kentucky is still one of the States in the United States that carries out capital punishment. Since the 21st of November 2018 however, Kentucky has been declared execution free for at least 10 years1. At present, there are 33 prisoners on the death row, of which only 3 have actually been executed. Judge Phillip Shepard, who is the chief circuit court judge and serves in Franklin County, Kentucky, stated that the death penalty protocol was...Read more by becoming an Amicus Member

High court’s ruling in Arizona death-row case could affect others
On 10th March 1991, James McKinney had broken into the home of Christine Mertens, when she unexpectedly came home. McKinney and his half-brother Charles Hedlund stabbed her and shot her, taking $120 in cash from her. Later that month on March 23rd, they both, again, broke into someone’s home. This time it was James McClain, where they found him asleep...Read more by becoming an Amicus Member

Sri Lanka’s top court stays executions until 30th October 2019
On 5th July, Sri Lanka’s Supreme Court issued an interim injunction to prevent the execution of four people until their petitions are heard in full. This was just one week after the country’s President Maithripala Sirisena announced that he would end the country’s 43-year moratorium on the death penalty, having signed the execution warrants of the prisoners...Read more by becoming an Amicus Member