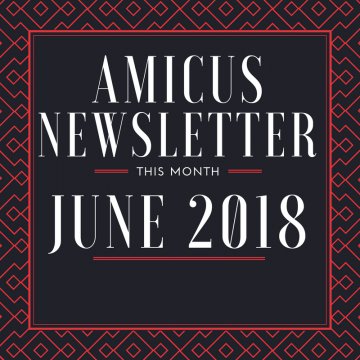 BOOKING FOR AUTUMN TRAINING NOW OPEN!!
We are happy to announce that Amicus' US Death Penalty Training Autumn 2018 will be taking place on 19th - 21st October and 3rd and 4th November.

For more details and to book your space click here.

CONGRATULATIONS NEW AMICUS STUDENT REPS!!
Well done to all our newly appointed new Amicus Student Reps. This year really had a high calibre of applicants and we look forward to working with you all for the period of 2018/19!

If your university does not have an Amicus student rep, have no fear! We will have another round of applications in August for universities without reps. So keep a close eye on the News and Student Groups sections of our website.

Check out our blog for updates from our interns in the US and UK.

Racist Jurors, Extreme Mental Illness - a Federeal Court is Rethinking the Case of Texas Death Row Inmate Andre Thomas
Death sentences and executions have been on a steady decline. Unfortunately, there is a constant steady drip of state-sanctioned killing almost entirely...Read more

Death Row Inmate Appeals Sentence on Basis of Jury Anti-Gay Bias
Charles Rhines, a gay death row inmate in South Dakota, has asked the U.S Supreme Court to make a ruling that it is unconstitutional for jurors to impose the death penalty based upon anti-gay animus and stereotypes. Rhines, who was sentenced to death for a 1992 murder, contends that...Read more

Death sentences becoming increasingly rare in Georgia
Throughout last year, no new prisoners were added to death row, one inmate died of natural causes, one had his sentence commuted, and one - JW Ledford Jr. - was executed. For the state which killed the most people in 2016 (nine inmates), it was a very quiet year...Read more

The Tragic Case of Corey Williams
Corey Williams was sentenced to death for the murder of 23-year-old Jarvis Griffin. On 21 May 2018, after more than 20 years behind bars, Williams walked free out of Louisiana State Penitentiary. One evening in January 1998, Griffin was shot dead in his car, having just...Read more

Amicus would like to extend a special thanks to Shelina Khudurun, Shaniah Royer, Jessica Hudson, Matthew Turner, and Will Hanson for their contributions to this month's newsletter.