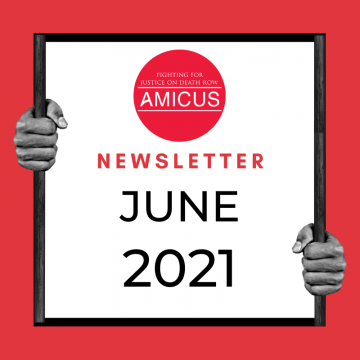 Arizona buys chemicals to make hydrogen cyanide, used by Nazis at Auschwitz, for gas chamber
In 2014, the State of Arizona temporarily suspended its use of the death penalty after mass criticism over the execution of Joseph Wood. Wood was injected with 15 times the amount of lethal injection permissible in Arizona’s execution protocol and was left ‘gulping’ for 2 hours before he died... Read more by becoming an Amicus Member

California Supreme Court hears case that could undo hundreds of State death sentences
On 2 June 2021, the California Supreme Court heard an oral argument on behalf of death row inmate Don’te McDaniel, who was convicted of two murders in 2004. The proceedings are considered to be crucial, and the outcome would potentially be groundbreaking for numerous others sentenced to capital punishment... Read more by becoming an Amicus Member

California Governor Gavin Newsom orders investigation into Kevin Cooper capital murder conviction
The Governor of the State of California, Gavin Newsom, has signed an executive order for an independent investigation into the case of Kevin Cooper. Cooper is a black death row inmate, whose murder conviction 35 years ago has been under fierce scrutiny... Read more by becoming an Amicus Member

FEATURE: The effects of death row
‘Life on death row’ is undoubtedly an oxymoron. The sentence of death begins immediately on its pronouncement. The ultimate sentence of death only impacts on the individual many years in the future when a death warrant is read prior to execution. The majority of prisoners on death row are housed in separate buildings to the rest of the prison population and are normally held in solitary confinement... Read more by becoming an Amicus Member