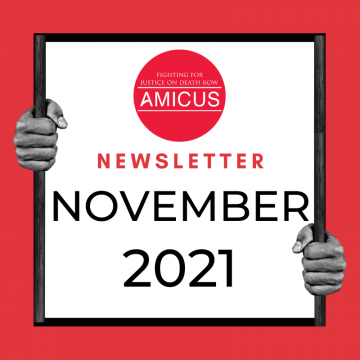 Death row inmates tell federal appeals court Oklahoma's execution of John Grant was just "latest debacle"  Julius Jones and three other Oklahoma death-row inmates have told a federal appeals court that the execution of Mr John Marion Grant was a debacle that proves corrections officials have not learned a thing in six years. "This latest debacle just adds to the existing mountain of evidence... that Appellants are likely to succeed on the merits of their claims below and demonstrates that Oklahoma's execution protocol is unconstitutional," the attorneys wrote... Read more by becoming an Amicus Member. A divided Supreme Court appears troubled by Texas death penalty religious freedom case The Supreme Court has been starkly divided over the request of John Henry Ramirez, a death row inmate in Texas, to have a pastor pray and to touch him during his execution. It is a case that has the potential to reshape religious accommodations for those who have been given the death penalty, and must force the Supreme Court to decide what it loves more' religious liberty or the legacy of one of its cruellest resoultions... Read more by becoming an Amicus Member. Texas judge recommends denying death-row prisoner Rodney Reed's innocence claim Rodney Reed, a man granted a stay of execution in 2019, has had a Texas judge recommend that he not receive another trial. Mr Reed was charged with capital murder in May 1997. The medical examiner had taken DNA evidence from the victim, Stacey Stites', body after other presumed evidence of sexual assault was discovered... Read more by becoming an Amicus Member. New polls show support for death penalty is declining in Utah and Oklahoma Two new public onion polls were released on 27 October 2021 assessing how many people favour or oppose the death penalty. In Utah, a Deseret News poll reported that 51% of voters surveyed said they, "oppose eliminating the death penalty" as a sentencing option. In Oklahoma, a poll by CHS & Associates reported that 64% of Oklahomas said they favoured the death penalty... Read more by becoming an Amicus Member. Julius Jones' life spared less than four hours before scheduled execution Julius Jones, a man who had been on death row for over 20 years, sat alone in his cell preparing to be executed by means of lethal injection. Only hours before his scheduled on the 18th November 2021, the Oklahoma Governor, Mr Stitt, commuted Mr Jones' death sentence to life without the possibility of parole... Read more by becoming an Amicus Member.

In 2014, a jury convicted twenty-nine-year-old Wesley Coonce for first-degree murder. While in federal prison serving a life sentence, Coonce and his co-defendant, Charles Michael Hall, attacked and murdered Victor Castro Rodrigues, another inmate. It was Hall, however, who gagged and blindfolded Castro. It was also Hall who consistently stated that he had killed Castro by standing on his neck - despite Coonce immediately claiming responsibility for the murder... Read more by becoming an Amicus Member. FEATURE: 'Prison Life: Wild Times Behind Bars' by Cameron Jeffries Review from Jen Wiggins After 37 years on death-row in Angola, prisoner Cameron Jeffries has written a book containing short stories about life in prison. Written on his prison tablet, 'Prison Life' is a personal and insightful account of life on death-row, making an indirect and yet powerful case for prison reform. In this month's featured article Jen Wiggins, volunteer at LifeLines, shares her thoughts on the book... Read more by becoming an Amicus Member.