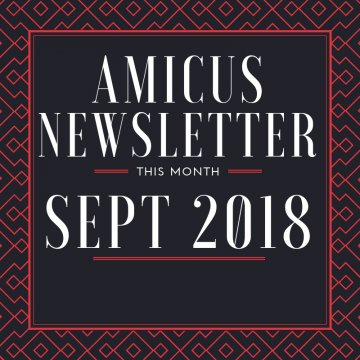 Considering doing a US internship but don't know how you're going to fund it?

Amicus in conjunction with Matrix Chambers are giving 3 US internship candidates bursaries worth £500 each to help partially fund their internship.

Deadline is Sunday 28th October at 23:59 pm.
For more details and to apply click here.

Spaces are limited. To avoid disappointment book your place here.

To check if your university has a rep and to apply click here.

Alternatively, check our the Student Rep section on our website for more details.

Amicus and amazon
There's now a simpler way to give to Amicus. AmazonSmile allows you to donate a small part of your purchase to a chosen charity at no extra cost. To find out more and set up Amicus as your charity visit the Amazon website here.

IN THE NEWS
Tennessee execution: Billy Ray Irick tortured to death, expert says in new filing
Billy Ray Irick was executed on 9th August 2018 for the rape and murder of 7-year-old Paula Dyer in Knox County, Tennessee. He was the first person to be executed in the state of Tennessee since 2009. Irick’s execution provoked ...Read more

The pope changed the catholic church’s position on the death penalty, will the supreme court follow?
On August 2nd 2018, Pope Francis made a revision to the Catechism of the Roman Catholic Church, stating definitively that the death penalty is unacceptable in all cases on the grounds that it is an attack on the dignity of a person. This marks ...Read more

Mexican national scheduled for execution in Texas despite claims of treaty violations
Both Troy Clark and Daniel Acker may be executed by the time this article is published, although one hopes that each of their legal teams manages to gain a stay or pardon; something which seems highly unlikely if we take the outcome of other death row inmates that came before them. Both Clark and Acker are due to be put to death by ...Read more

How the death penalty ruptured the state’s Court system for 20 years
On Wednesday 5th September, the state met its burden. It was a landmark day for Missouri Supreme Court as it continued to hear arguments in Jefferson City in a death penalty case that bounced up and down the state’s Court system for 20 years. Terrance Anderson’s name became synonymous not only with the Supreme Court, but also with ...Read more

Oklahoma man seeks new trial in white supremacist plot
In 1999, Danny Lee was sentenced to death for his role in the 1996 killings of an Arkansas family. Prosecutors claimed Lee, and his accomplice Chevie Kehoe, murdered gun-dealer William Mueller, his wife Nancy and her 8-year-old daughter Sarah Powell, in order to steal guns and money as part of a plot to establish a ‘whites-only’ nation in ...Read more

Amicus would like to extend a special thanks to Elena Michael, Rani Kaur, Micheal Henshall, Bryony Sheard, and Eleanor Cassidy, for their contributions to this month's newsletter.